E-Mail:
wolfgang.hess [at] biologie.uni-freiburg.de
A DFG-funded PhD position on the differentiation of heterocyst cells in Cyanobacteria is available in Freiburg in 2023

Cyanolab, the Genetics and Experimental Bioinformatics unit at the University of Freiburg, Germany, is searching for a scientist to participate in the project "Early Determinants of Heterocyst Differentiation in Multicellular Cyanobacteria", which is part of the DFG-funded Priority Program SPP 2389 “Emergent Functions of Bacterial Multicellularity” (@spp2389). The intended start date is in 2023. The position is for a duration of 3 years and funded according to DFG guidelines (65% E13). The PhD researcher may associate with the structured PhD program MeInBio – BioInMe, which applies cutting-edge approaches to single cell analyses.
Cyanolab researches the RNA biology of photosynthetic organisms. For some relevant publications of our laboratory, see Current Biology (2017) 10, 1425–1436; RNA Biology (2020) 17, 1442-1458; The Plant Cell (2021) 33, 248–269.

The project targets the mechanisms underlying characteristic changes in gene expression that lead to the differentiation of heterocyst cells in Cyanobacteria. Cyanobacteria are ecologically important microorganisms due to their photosynthetic lifestyle and the fixation of both carbon (CO2) and  nitrogen (N2). Heterocysts are the cells specialized for the fixation of atmospheric nitrogen into organic compounds. The project includes the characterization of single-cell transcriptomes and of the impact of selected regulatory RNAs and other regulators using state-of-the-art experimental approaches.
For this we seek a highly motivated candidate with a background in microbiology, biochemistry, molecular biology or molecular genetics and related fields (M.Sc. or equivalent). The project work is carried out within the national Priority Program SPP 2389 that involves regular meetings and timely delivery of results.

Cyanolab is located at the University of Freiburg, located in one of the most beautiful regions of Southern Germany in the heart of Europe. Freiburg is known for its high quality of life at the slopes of the Black Forest, close to the Alps, Switzerland and France. The Faculty of Biology at the University of Freiburg is one of the leading Life Science Departments in the country.

Please send your application by Email to: wolfgang.hess@biologie.uni-freiburg.de.

In your application, please include (1) a CV in tabular form, (2) a brief summary of previous research experience and academic qualifications, (3) scanned copies of university degrees and (4) contact details for at least one reference.

Bacterial genomes are not only densely packed for the ‘normal’ protein-coding genes but harbor also hundreds of genes for non-coding RNAs and an unknown number of small genes encoding peptides and small proteins. In functional analyses, these small genes are often overlooked.
NsiR6 was initially identified in Synechocystis sp. PCC 6803 as a transcript induced by nitrogen starvation (Kopf et al., 2014). We then showed that it is not a regulatory (non-coding) sRNA but encodes a small protein of 66 amino acids (Baumgartner et al., 2016). Looking for its possible function, we have now characterized it as a phycobilisome break-down factor during nitrogen starvation.
Phycobilisomes are very efficient light-harvesting structures but they are costly to make because their synthesis require substantial amounts of organic nitrogen. To recycle this nitrogen, cells disassemble phycobilisomes during periods of nitrogen starvation, leading to severe loss in pigmentation, which is visible to the naked eye as chlorosis or bleaching. We found that lack of the nsiR6 gene in deletion mutants led to a non-bleaching phenotype, therefore we renamed the nsiR6 gene to nblD. Homologs of nblD are widely conserved in phycobilisome-containing cyanobacteria.
The encoded protein, NblD, binds in a very specific way to the phycocyanin beta subunit (CpcB), but only when the CpcB protein has chromophores bound. This points to a special role in dealing with the light-absorbing pigment-protein complexes, which are potentially dangerous for the cell during phycobilisome disassembly. To gain insight into the function of NblD, extensive pull-down assays and mass spectrometry analyses and Far Western blot have proven crucial.
Please read the full story here: Krauspe et al. (2021). A short comment in German can be found here.

Special thanks go to Matthias and Oliver at the Medical Center of our university, to Philip and Boris at the Department of Quantitative Proteomics at the University of Tübingen and to Nicole at the University of Kaiserslautern for the great collaboration. We thank our colleagues for helpful discussions and the Deutsche Forschungsgemeinschaft for funding Vanessa through the priority program SPP 2002 “Small Proteins in Prokaryotes, an Unexplored World”, facilitating collaboration within the research group FOR2816 “SCyCode” and through the RTG MeInBio - 322977937/GRK2344.

The messenger between: How mRNAs convey genetic information to the sites of photosynthetic complex assembly

Photosynthesis is the biological process in which solar energy is converted into chemical energy. The energy is then used to produce organic molecules from carbon dioxide. The key reactions of photosynthesis occur in plants, algae and cyanobacteria in two complex structures, the photosystems. While it is well known that the functional photosystems reside in a special membrane system, the thylakoids, many details of their molecular assembly and the insertion of the proteins into the membranes have remained unknown. A surprising discovery now published in Nature Plants (07 September 2020) demonstrates that it is not the pre-synthesized protein that is transported to the thylakoid membranes for photosystem assembly. Instead, the mRNAs encoding core proteins of the photosystems are transported to the thylakoid membranes in a ribosome-independent process. The findings contribute to a developing concept that mRNA molecules can provide much more than just the sequence of the protein: in this case they also carry signals that seem to control the location and co-ordination of photosystem assembly. The identification of two proteins likely involved in this process by interacting with these mRNAs opens the road towards the detailed understanding of the molecular mechanisms involved. These results have been obtained in an international cooperation between Cyanolab (special congratulations to Luisa and Matze!), Annegret Wilde (Bacterial Genetics Freiburg), Satoru Watanabe (Tokyo, Japan) and was led by the former FRIAS fellow Conrad Mullineaux (Queen Mary University of London, UK). We are grateful for support by the DFG-funded Graduate School 2344 “MeInBio - BioInMe: Exploration of spatio-temporal dynamics of gene regulation using high-throughput and high-resolution methods".

Award for the best doctoral thesis in the last year

We congratulate Juliane, for receiving the "Elisabeth Gateff Prize 2019" from the German Genetics Society and the "Hans Grisebach Preis 2019" of our university, for her outstanding dissertation on the „Identification and characterization of crRNA processing endoribonucleases and new insights in adaptation and interference during CRISPR-Cas immunity in the model cyanobacterium Synechocystis sp. PCC 6803“! 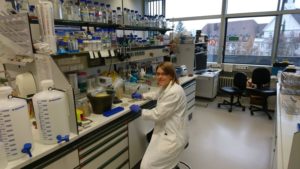